FREE SHIPPING AUSTRALIA WIDE ON ORDERS OVER $99 !
CREATE AN ACCOUNT TO RECEIVE A PROMO CODE FOR $5 OFF YOUR FIRST PURCHASE! 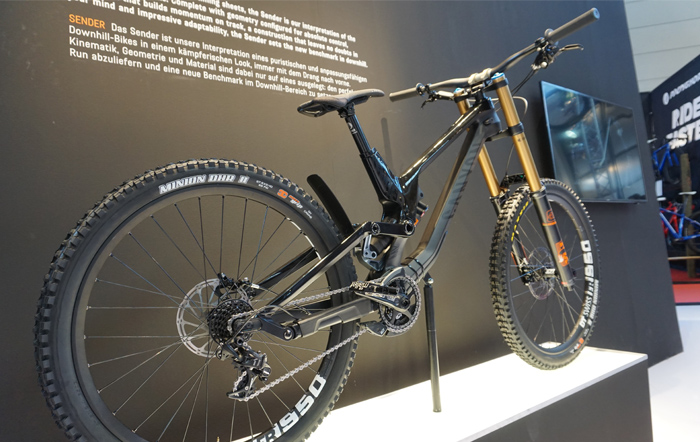 If it’s sick MTB gear and bikes you’re after then what better place to go than Eurobike. To finish up our time in Europe before heading back to Australia MTB Sport attended the Eurobike trade show held in Friedrichshaven Germany. Eurobike is a huge show with 1,350 exhibitors from 53 countries, that’s a lot of bikes and a lot of bike related products. As I am sure you can imagine there’s a lot of really cool mountain bikes and products to see, and of course there’re some outright bizarre products as well.

Eurobike wasn’t just about drooling over sick mountain bikes, we also had business to take care of. We managed to pin down the guys from Rocday to discuss the upcoming arrival of Rocday on Australian single tracks. We were stoked to get a sneak peak at the 2017 range of gloves, they really have taken their three models of mountain bike gloves to the next level. We can’t wait to see what they come up with for their new MTB jersey designs.

We also managed to get some other business relationships in the pipeline, it’s too soon to mention details but there’s some exciting news to come. We’re in the process of putting together an order with another great brand from Europe whose MTB gear will really complement what we already offer from Rocday. Watch this space!!!!

After business was taken care of we went window-shopping, like kids in a candy store. What really blew us away was the amount of e-bikes, we all know they’re on the rise and the technology is progressing quickly but we didn’t expect to see more e-bikes than conventional mountain bikes. We’re not completely sold on e-bikes, especially in the form of mountain bikes or even downhill versions like the one from Haibike in the pic. I guess as some people are saying, it’s less lazy making the climb back to the top of the trail on an e-bike than taking a lift.

Well Eurobike also had plenty of “old school” mountain bikes on display and some pretty sick ones at that. One of our favorite manufacturers is Canyon and the downhill Canyon Sender truly is a work of art. This sleek downhill shredder has amazing lines that really set it apart from other bikes. The Canyon Spectral is also a rad looking all-mountain trail tamer. We were surprised not to see the enduro Strive but according to the staff the 2016 model is so good they didn’t need to make any changes, I guess if it isn’t broke then don’t fix it.

As you would expect the stands for manufacturers such as YT, Yeti, Banshee, Evil Saracen, Pivot and Santa Cruz were also a mountain bike lover’s heavens to wander around. Even pimping components from the likes of Chromag, Crank Brother, HT and Renthal were displayed more like beautiful works of art rather than something you would thrash down your local trail.

As well as the bikes we also enjoyed seeing what was on offer from mountain bike helmet manufacturers, particularly in the way of helmets with removable chin guards. The Bell Super 2R has turned some heads on the trails over the last year so we new there would be some answers form their competitors at the show. Companies such as Leatt, Met and Uvex all had some cool designs but our favorite was the new Giro Switchblade.